Last week there was a bit of a hum (sorry, couldn't resist) on the South African corner of the interwebs about copying. One thing that stood out for me was that, while the hordes were outraged about a designer being ripped off by a corporation, very few were even mildly irritated that a photographer's work had been blatantly and exactly copied. The general idea seemed to be that artists need references, and the act of rendering an image in another medium makes it all okay.

Artists do indeed need reference material. I've met authors who think that illustrators spend their time lounging around in art galleries and libraries doing research, hiring models and wildlife specimens, drawing from life and taking their own photographs. But tight deadlines, working on weekends and late into the night (museums aren't open at 3am) as well as time for paint and paper to dry so you can scan the damn thing and get it handed in... well, you can see why we use Google image searches.

There's a better way to use references, though, than to copy, with pinsharp accuracy,  the first thing that pops up. Because that is stealing.

Here's how I do it. Recently I had to draw a cherub, and the drawing was big enough that I couldn't just make it up and fudge the details. I searched online for images of cherubs - lots of them. I pasted them into a Word doc, and weeded out the ones I didn't think would be useful. 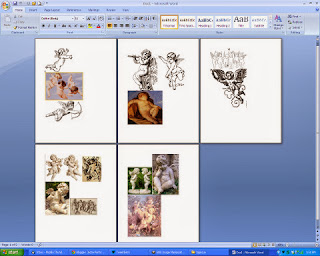 I printed it out, and with the references spread out on my desk I started scribbling some general ideas. 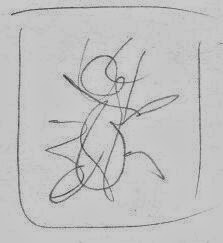 Okay, I know, but it's a sketch. Thought process made visible, or somesuch. It gets better. 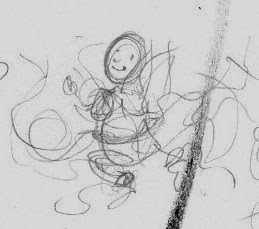 See? Now I started having some idea of the kind of pose that would work for the illustration, and now I also started realising just how much I needed the references. It's only when you try to draw something from memory that you understand how little you know about its appearance. 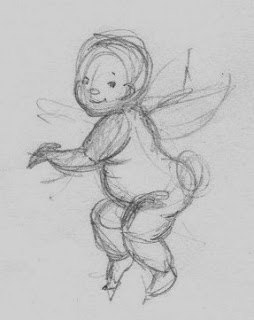 Another sketch to see how the bits fit together: toes from here, hands from there, belly and bum from somewhere else. None of the reference cherubs had quite the pose I wanted, and because I started with my own vague idea, I wasn't tied to the references. This is also why I needed so many: if you use multiple references to figure out how the object you're studying works and is put together, you can implement that understanding in your own rendering, and it comes out looking like you drew it. You're able to invent. Ultimately, you make it up. A new thing. 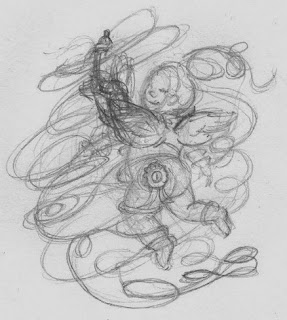 Right, I think that will work.

(I'll post the final version once it's been published.)

I loved reading this post Jesse. Nothing beats your own interpretation and style - simply because it is yours :)

Great article. Thanks Jesse. I enjoyed seeing the process you follow.