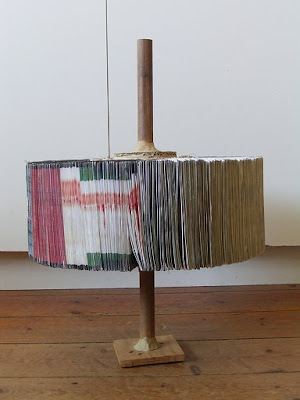 The 1000-page flipbook, balanced on it's end. The flat bit is for attaching to a motor. We wanted a crank mechanism that could be turned by hand, but designing and making gears and cogs was a bit beyond us. Gears and cogs would have been necessary, as the book is really, really heavy. 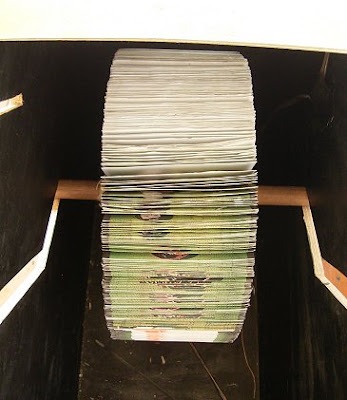 This is how it slots into the machine. The inside of the box is painted black so that it won't distract from the animation. An electric light was attached to the 'ceiling', but it blew up about 5 minutes in to the official showing. Luckily we had battery-powered lights on hand, and stuck one in with gaffer tape. 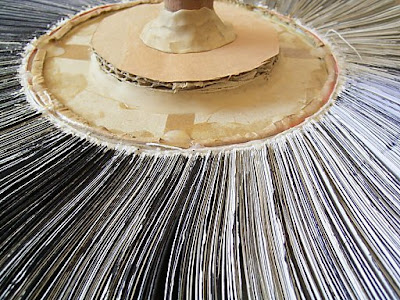 Gaffer tape and putty solved so many problems! The book is attached to a cardboard drum, attached to a broomstick. It was bound in one long strip, and then glued to form a circular book. The drum was made and measured, and then the book was eased over it and glued on, so that it would fit tightly. Inside the drum are 2 circles of corrugated card, like the ones on the outside, glued and puttied to the axle for reinforcement. 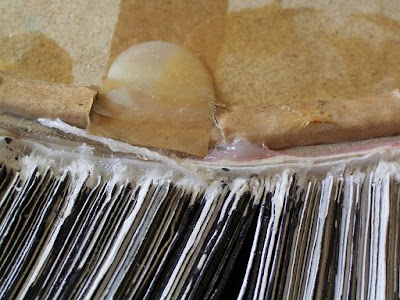 Contact glue, wood glue (PVA glue) and luck. The pages are bound in pairs, one sheet of paper folded double. The join needed to be as flexible as possible, and the risk of pages flipping in clumps reduced. We made a blank book and then glued the images in. Any white edges were coloured in with black ink.

This final book was the third one. The first one was completely blank, made to practice binding, and to test animation - how many frames were needed to produce the illusion of movement, whether we needed to double up frames to slow things down, that sort of thing. We also glued frames into old phone books and flipped the pages by hand to test the animation. The second book went into a cardboard mockup of the final machine. A neighbour had thrown out the box their washing machine had arrived in, so we took it. (To some degree, the size of the washing machine determined the shape of the mutoscope.) The final book was only ready the night before the deadline. I think we tested it at 3 in the morning. 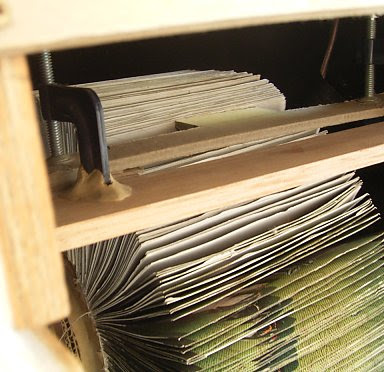 The most important part of the mechanism: the pacer. It holds the pages back, so the viewer can see the images. Without it the pages wouldn't flip. It needs to be strong, to hold the pages back till the very last instant, so that they fall fast when they're released. (In this photo it's not holding the pages back, but that's because the book isn't turning.) 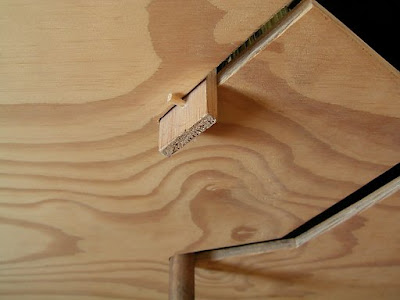 Stoppers to hold it in place. Without these, the pacer got pushed out of line by the weight of the book. The pacer needs to stay perfectly central, otherwise the speed of flipping is affected. 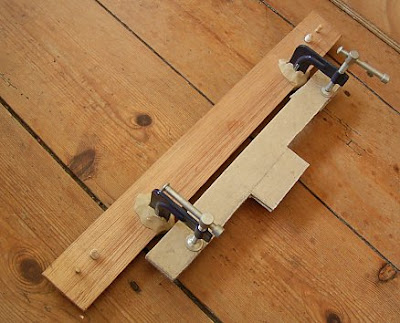 Our pacer also needed to be adjustable. It has to be barely visible to the viewer, but protrude far enough to be able to exert some force on the turning pages. This was something we could only set once the book was in place. Clamps were the answer. And putty, of course. 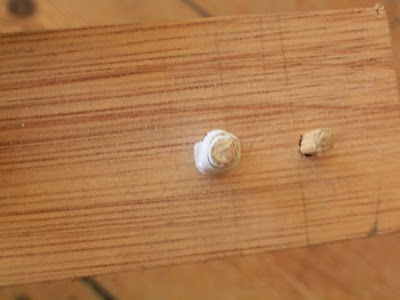 Micro adjustments to the pacer stoppers. You can measure all you want, but when you're cutting things with a hacksaw, you're measuring in centimetres, not millimetres. 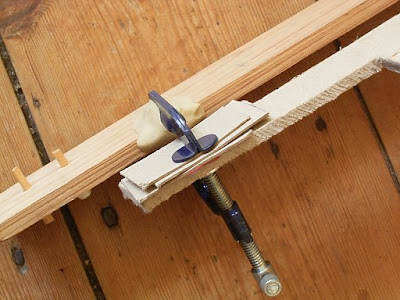 The book wasn't absolutely perpendicular to the viewing angle, and so the pacer had to be adjusted to be parallel to the pages, or it wouldn't be able to hold them back evenly. Micro adjustments, again. That splendidly thick card was a lucky find: the art shop were out of card, and I probably looked about to burst into tears, because they offered me the card that their card was shipped in. For free. They were going to throw it away!!! It was so thick it had to be cut with a hacksaw - lovely lovely stuff. We used it for the pacer and the sides of the drum, and on the prototype machine it was used for a huge wheel that served as a way to turn the book by hand. 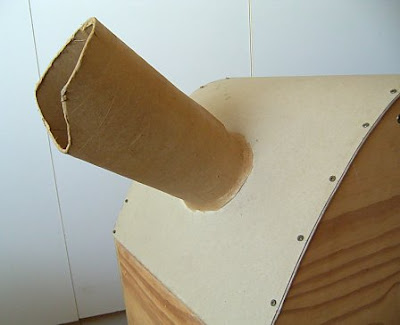 The viewing tube, a rolled piece of card, taped up tight with gaffer tape, puttied to the viewing hole, and neatened with strips of brown paper dipped in wallpaper paste.

Now this is dedication! Good for you for making it happen.

I am so intrigued in this series! Looking forward to the animation!

WOW! I've been facinated by these devices since I saw one at Disney World as a child. I've been thinking of building one lately, as I'm interested in bookbinding and animation. Thanks for sharing! Can't wait to see the video.

Jesse, you are simply... a genius.

Don't throw it away. Find another washing machine box and put it inside and put it in the ceiling for fishmoths to feast upon. You'll know it's there. It makes me want to weep!

That is so amazing...well done, well done! I am squirming in my seat to see the animation too!

Talk about process. This is a labour of love, obviously. Cannot wait to see it in action!

I thought you rode it like a bicycle. Sorry - guess my previous comment made no sense. Good exercise for that one arm, though!

Looks like it was a lot of fun, hard work.

and how long did this all take you? You still look so young :)