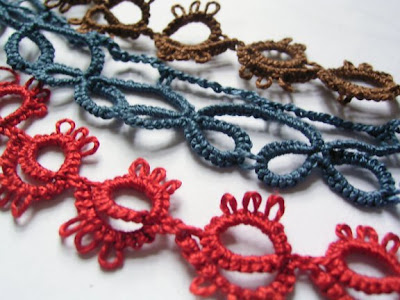 When I was trying to learn tatting from books, I became very frustrated at the how-to illustrations that didn't seem to explain properly. After resorting to YouTube tutorials, I looked back at the illustrations and they'd improved! I suppose everything is easier once you know how to do it.

But here's my attempt to fill in what seemed missing on my first tries. I've added swirly arrows to the standard hand illustrations, and also a more simplified schematic drawing. I found that the position of your hands was less important, initially, than understanding where things were supposed to go.

First part of the stitch:

Second part of the stitch:

And here's the bit that's really hard to draw:

You can learn the stitch using a bit of card instead of a shuttle - simply cut or fold paper to a reasonably small size, wind some thread around it, and start knotting. Do look at YouTube and other tatting instructions for more complete explanations; these drawings are supplementary.

Jesse, you're something else. Not only do you do tatting, you then go and illustrate it. Fantastic.

Krystle said...
This comment has been removed by the author.
9:46 pm

Hey, great job on those illustrations. I learned from a book and it was immensely frustrating. Now there are some good Dvds available, as well as youtube. Hopefully tatting will become more accessable.

Oh my gosh, I might actually be able to do this now! I learned needle tatting a while back, but I could never figure out shuttle tatting. And it's hard to find patterns for needle tatting, so I just stopped.

Thanks so much for sharing this!

This is great! I must try it. I am busy making a purple dress and the pattern has trimming around the neck that looks very much like this. You make it look so easy.

I have to agree with Heather's comment! You are amazing!

Jesse, great illustrations! Loved the pieces you made.

This is such a coincidence: a friend from my knitting group taught me tatting last Saturday, at her own initiative (I didn´t even know there was such a technique, which on top of all here receives the name of "frivolité"). I´m enjoying it too much now, inspite of its name! (or maybe also because of it, who knows...)

Those are absolutely fabulous illustrations! Way to fill in the gaps. I sure wish I would've had these available when I was teaching tatting years ago! I just ♥ your swirly arrows! ☺

Thank you, thank you!
I was taught to tat many years ago, had forgotten how and now it looks like I will be able to start again.