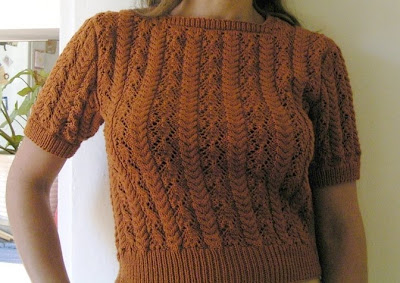 Another pattern from Vintage Knits by Sarah Dallas. Double-knit cotton, and so many cables I caved in and learned to cable without a cable needle. It's a pretty straightforward pattern if you're taking notes and not watching The Wire, but if you are - prepare to muck up the decreases a few times. (It's a good idea to chart the pattern repeat, too, as the book doesn't have charts.)

In other knitting news, a great way to store circular needles. To be honest, I'm probably going to punch holes in the needle sleeves, instead of sewing, but I have an old filofax (remember those?) that would be perfect for this.

I'm working on the sewing patterns I promised in the previous post, but illustration jobs suddenly arrived in a bunch, demanding attention. As soon as I've managed to get them fed, watered, and settled, I'll put the patterns up.

Email ThisBlogThis!Share to TwitterShare to FacebookShare to Pinterest
Labels: knitting

This sweater is a perfect compliment to the sexy peach panty you made. Totally hot. And I'm get cross-eyed just thinking about knitting what looks to me like the most complex pattern EVER. *speaking as a newbie*

And So I Whisper said...

WOW!!!! so many cables.... very nice! Gonna read about the circular needles now. Mine are all tangle in a box.

Beautiful, I love that yarn color!

What a stunning top! I have been avoiding cables so far, but I just love the look of it. One day when I have time and patience, I will try it! Looks complicated but many knitters assure me it is not. Thanks for linking my circular needle storage idea! Hope it inspires someone else. (To be honest, I seriously considered just punching holes in the plastic sleeves I bought the needles in, but it was just not colourful enough for me!)

The colour is lovely, and so is the shape. *And* I notice it's nice and short. That's the bonus of knitting/sewing something yourself, I guess - you aren't prey to those fashion designers who seem to have decided we've become a nation of long-waisted women.

I love the style of this knit and it makes me extremely envious for the simple fact that I don't have the patience to sit down and knit something like this myself.

the circ-storage tip is really cool. been thinking i should make some sort of a storage thing for mine... might just do what you are planning to do ;)